A Sulcata cystotomy and spay via pre-femoral windows

A six year old, female African Spurred Tortoise (Centrochelys sulcata), presented with a 48-hour history of anorexia, her owner also reported that she had passed a large volume of gritty urates along with brown coloured liquid (Figure 1). Before this the tortoise was reported to be very active and eating well. She was fed a diet consisting of 75% grass and hay and 25% freshly picked edible plants. She was soaked regularly and had access to fresh water at all times. 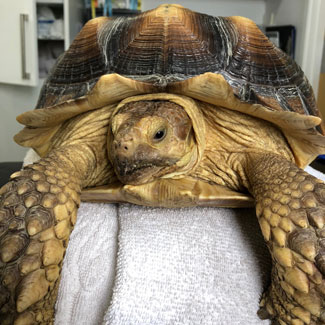 On clinical examination she weighed 7kg, was of good body condition and very strong, limiting a complete, conscious clinical examination. Conscious radiographs were performed demonstrating a 5.6mm x 5.5mm calcified structure in the region of the bladder, a large bladder stone was suspected (Figure 2). Bloods were taken to assess biochemical and haematological values. These were all within their respective reference ranges. 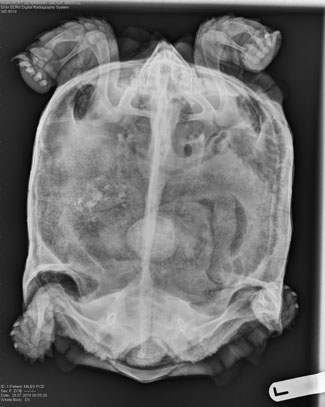 Figure 2: A Dorso-ventral radiograph demonstrating the bladder stone in situ.

As a result of the combination of the clinical history and radiographic findings it was decided that the tortoise should be taken to surgery. A pre-femoral approach (Figure 3) instead of a plastromy approach was undertaken to ensure a faster return to normal behaviours, and because the long-term medications often associated with the plastromy approach would have been difficult in this species. 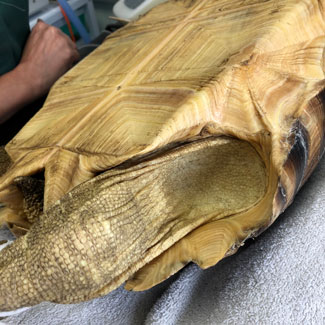 Figure 3: One of the pre-femoral windows of the African Spurred Tortoise.

The tortoise was premedicated with 1mg/kg Morphine IM, a course of 8 injections of 20mg/kg IM Ceftazidime was also initiated. 10mg/kg IV Alfaxalone was given to sedate the tortoise enough to allow intubation and then ventilation using Sevoflurane. The tortoise was positioned in dorsal recumbency and each of her legs where extended and tied in a position that allowed for easy access of the pre-femoral windows (Figure 4). The surgical site was sterilely prepared and the skin, muscle and coelomic membrane incised, providing a vertical opening to the coelomic cavity, a lone star retractor was used to aid visual inspection of the coelomic (Figure 5). 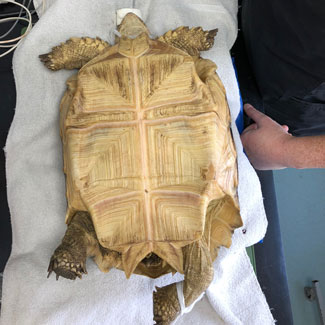 Figure 4: A picture demonstrating the ideal placement with the leg tied back to aid visualisation of the surgical site. 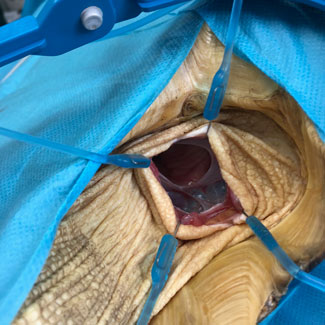 Figure 5: The use of a Lonestar retractor aids in maintaining as much of a visible surgical field as possible.

Once the tortoises coelomic cavity was open her reproductive tract became immediately obvious (Figure 6). Obscuring the surgical field. In order to visualise the bladder and remove the bladder stone the reproductive tract was removed. This was performed on both sides, through each of the pre-femoral fossae. Once there was a clear surgical field, an assistant put pressure on the bladder through the hole in one of the pre-femoral fossae, pushing the stone and the bladder closer to the other side. This allowed partial exteriorisation of the bladder. The surrounding coelomic cavity was packed with sterile, saline soaked swabs, stay sutures were placed to hold the bladder open once a cystotomy had been performed (Figure 7).

Figure 6: The reproductive tract obscuring the surgical field and as a result it was removed. 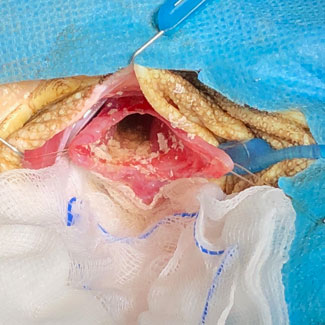 The stone was broken up inside the bladder and the stone removed in a piecemeal fashion (Figure 8). The bladder was then flushed and closed in a double inverting patter with monofilament suture material. The coelomic cavity was flushed with warmed, sterile saline, then the coelomic membrane, muscle and skin where then closed separately, again with monofilament suture material, with the external layer being closed in an interrupted everting pattern (Figure 9). 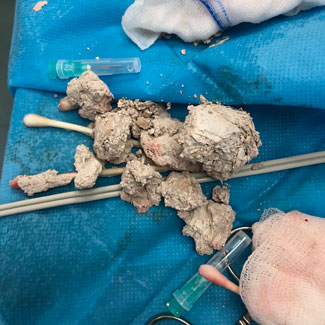 Figure 8: The bladder stone removed in pieces after being broken down inside the bladder. 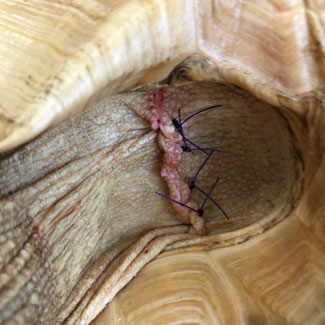 Figure 9: The skin was closed using an everting pattern of monofilament suture material.

In the recovery period the tortoise was given 0.5mg/kg IM meloxicam, which was continued for 14 days post-surgery in oral form. A complete course of Ceftazidime was given. 1mg/kg IM Morphine was given daily for 72hr post-surgery. The tortoise returned to normal eating habits 12 hours after surgery and has made an amazing recovery.

When is the spine unstable after trauma?