One year history of sneezing in a nine year old dog

Lewis is a nine year old male neutered Coton de Tulear that presented to Highcroft Veterinary Referrals this month for investigation of a one year history of intermittent sneezing. In the last six months the sneezing episodes have become more frequent, and right sided nasal discharge has also started. The discharge is clear and malodourous.

Previous treatments with courses of anti-inflammatories and antibiotics failed to control the clinical signs.

The main differentials for chronic sneezing and unilateral nasal discharge in an adult dog include neoplasia, foreign bodies, oronasal fistulas and aspergillosis. These differentials were discussed with the owner.

On clinical examination Lewis had a right sided clear nasal discharge (figure 1). The rest of the examination was unremarkable.

Lewis was admitted for further investigations. Pre-anaesthetic blood work was unremarkable. A complete upper airway examination under sedation showed adequate laryngeal movement, the soft palate was normal in size, and there was no evident periodontal disease.

A CT scan of the nasal cavity under general anaesthetic showed right sided rhinitis with focal destruction of turbinates and bone lysis (figures 2 & 3).

Rhinoscopy was then performed using a 3.7mm diameter flexible endoscope (Broncho-FiberscopeStorz). Three grass blades were retrieved and the nasal cavity was flushed vigorously.

Surrounding the foreign bodies, and attached to the nasal mucosa, there was moderate amounts of white and thick mucus with fungal plaque-like appearance. Samples of the mucus were submitted for cytology , culture and panfungal PCRs.

Figure 7. Photograph  of Lewis at the time of discharge from the hospital

Lewis was discharged from the hospital the same day of admission on anti-inflammatories and a course of broad spectrum antibiotics.

Aspergillus was detected on pan fungal cPCR. Given the chronicity of the history, the imaging on CT, and the macroscopic appearance of the lesions observed during rhinoscopy, it is very likely that fungal infection was opportunistic and secondary to the nasal foreign bodies.

We tend to think that these types of foreign bodies show acute onset clinical signs, but as seeing in Lewis’s case, grass blades can be insidious for our patients and they can remain in place for several months. Without the adequate equipment and expertise, it would have been very difficult to diagnose and retrieve these foreign bodies successfully. 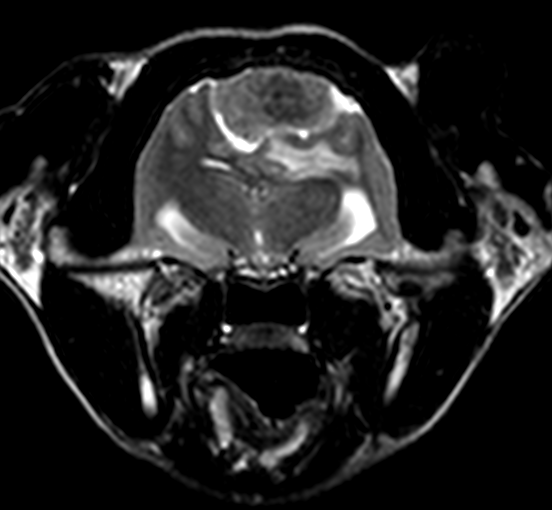